Past week of my life was a very exciting experience (14 Aug.- 20 Aug. 2011), I along with my wife and colleague Arjumand went to St. Petersburg (Russia) for RuSSIR/EDBT summer school and International Conference centered around Information Retrieval (Computer Science). This was my first time ever to visit Russia and I was little confused about how it would be (as very little is known about Russia in Pakistan). Reaching there after long stretched hours of flight consumed me a lot in terms of energy. However, as soon I arrived I found my surroundings very normal and helpful as it was in South Korea, China and Malaysia (my previous experiences); everything looked usual and cooperative. Team of RuSSIR/EDBT arranged a nice hostel for the two of us which was in fact a studio apartment and better than where I had ever stayed previously during my short trips. Russian people could barely talk in English but were polite and helpful (thumbs up!).

On 15 Aug. we went to the school venue for our educational commitment through a bus followed by metro (simply subway or rail) and then a short walk to the campus of St. Petersburg State university. We faced little confusion in reaching our destination but managed to reach through words of passing by people. In the gathering, there were fine lectures for full five days as part of summer school and nice papers and posters during the conference. Our daily routine from 15-19 Aug. had a duration from 9:00 AM till 9:00 PM and every second of it paid off in terms of learning. In breaks we had chances to socialize with people hence forming future possible collaborative/cooperative connections. Suggestions and fine word of questions led us to have a feedback which could not be possible to generate within a week (usually). During the gathering, we witnessed people from social sciences taking keen interest in aspects of social networks which shows how aware they were about fields getting merged. A guy from industry, Yandex (similar to Google in Russia) came to me after reading my research paper for interacting and this shows how practical and serious things were there. Similar meaningful was my interaction with guy from mail.ru (another giant in Russian industry). All in all it was a very nice experience and I feel like typing in something for it as a token of appreciation.

I close my post by saying thanks to the team of RuSSIR/EDBT for organzing such an event and I also want to thank to the participants who put further five stars to the gathering.

As a note for Pakistani people who know a very little about Russia: it is a nice place with nice people and very open place for knowledge cooperation and collaborations, do consider it as a meaningful option for academics and industry. Further, feel free to write back to me.

I had planned to attend WWW 2011 this year which begins today. Every researcher working on the Web and its related technologies knows that WWW is the greatest academic conference for Web researches with an acceptance rate as low as below 20% . It is the same conference where Google founders Larry Page and Sergey Brin presented their famous PageRank algorithm. The venue for this year's WWW Hyderabad, India was particularly exciting for me as I always had a wish to visit my neighboring country India and this year I felt it's a natural chance for me.
WWW 2011 is being organized by IIIT Bangalore and they also announced few fellowships for attending the conference. I applied for the NIXI fellowship which was a fellowship program aimed at encouraging faculty and students from under-represented parts of the world, e.g. developing countries and poor regions of developed countries, etc. to have representation in this year's WWW as the theme in particular was "Web for All". Hence, in line with the theme preference for NIXI fellowship was given to those who had not attended a WWW conference in the past, who were from a region not already having considerable presence at WWW, and who had a demonstrated interest in web and its technologies. Based on my publications related to the Web and my credentials in this field, I got the NIXI fellowship. I along with my wife were the only Pakistanis attending WWW 2011, and this to the best of my knowledge is the first ever representation of Pakistanis in a WWW conference.
Then began the process of applying for Indian VISA which turned out to be the bottleneck. I was short on time and Indian VISA application center in Seoul informed me that the process for Pakistani passport holders takes a month. I then approached the Indian Embassy in Seoul and I found them to extremely co-operative, they called me to their office in Seoul and were ready to give me special consideration on account of my research profile. They said they could give me VISA in one day if I showed them clearance from Ministry of Home Affairs, India which happens to be the main requirement for getting conference VISA for India. And then began a huge round of email exchanges with the WWW Secretratriat who happened to be from IIIT Bangalore and was highly, highly co-operative throughout. Despite their tremendous efforts the Ministry of Home Affairs (MHA), India refused to give me clearance without stating any reason for the denied clearance.
IIIT Bangalore and their staff did all what they could (they were simply great people to interact with). However MHA stood against values of science and they were unable to understand importance of scientific merit. Indian leading school would learn a lot from this, MHA is shutting off doors of science (without even bothering for any sort of explanation). I was invited there with delegate status, and even then MHA ignored seemingly because of carrying Pakistani Passport with status on merit i.e., got a research paper approved and got the fellowship. If such profiles are not invited then who else could they invite naturally and intellectually. I believe there is a lesson to learn on both sides (specially for intellectuals who could turn things by using intellect). MHA has no idea, they are killing science and I am not the only one who is denied, one German scientist was asked for Birth certificate (God knows what on earth they are thinking) and a Russian scientists was denied VISA due to her passport expiry period within 3 months (however, she is renowned name in the field and co-founder of famous www.tweetedtimes.com).
So today, WWW 2011 begins in Hyderabad, India. I had thought of writing a blog post covering the various sessions of the conference but it was not to be. But despite all that I wish all the best from my side to WWW 2011 organizers and attendees; would love to see the tweets coming from there: #www2011. I have already read some of the WWW 2011 papers and seems to be a pretty exciting conference this year.
Posted by Unknown at 1:07 AM 3 comments:

These were my feelings on the day of KAIST Graduation Ceremony 2011 i.e, 11th February, 2011 . I have managed the time to post this on my blog today. Here are my feelings for that day:

Finally, the long awaited day has arrived, the tradition of passing on the light at KAIST. The difference this time, me and my wife get two degrees of MS by Research as only Pakistanis in Computer Science in world's 21st (this year it's 24th) ranked university under Technology (simply, Asian MIT). With a lot of hopes and a mix of emotions, the yellow banded graduates head to the ceremony. This is a product of hard work of everyone associated with us (in terms of academics, advices, emotions, etc.,) and importantly a responsibility to pay back to the seed land, Pakistan. Never felt but the truth is, every single degree counts for Pakistan (part of Muslim world). Hopes went on to height as we went on to recieve something which looked impossible if life goes into flash back of more than two and a half years with no money and no sense of how to pursue higher education in ever challenging field of Computer Science. I can't mention everyone who stood at our backs in the tough times, but one person I can never forget to mention is my mother as she is the lady who turned me into what I am and led me after passing of my father when I had just passed 7 grades of basic schooling. My mother made me look to the world through her eyes and turned me into what made me a yellow banded KAISTIAN, she completed her PhD after the passing of my father and taught me by her living example before me to target higher than the known limits of the world, a lady who not only took great care of her children but also attained biggest pride in education (i.e., PhD) after passing of her life partner and my father. This by example, shaped me well and I am taking not one degree but two, one of mine and other of my wife.

Having said some of my background now comes some snaps that now become part of golden memories :) 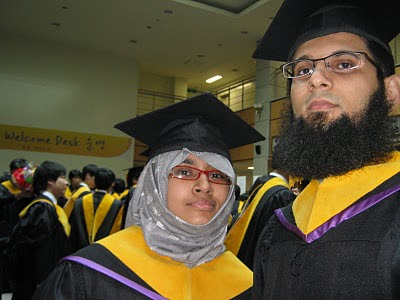 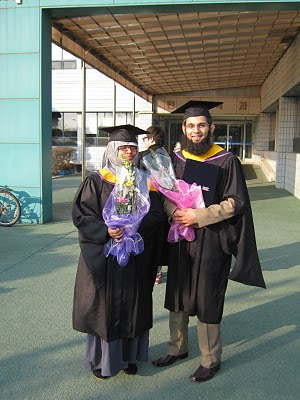 I have been asked this question (i.e., how to organize research talk through slides) by people from sometime and I have been replying them in private communication (i.e., over chat, emails and other means). However, now I have decided to write a blog post on this subject for greater audience.

Actually, there is no perfect answer to it but there are few tips which may be meaningful and applicable after some adjustment per area of research (it also depends upon maturity of research which is being presented).

Some tips regarding a research talk (presented by slides) with do's and don'ts are as follows.

Do's
Following is the link of my defense of Masters by Research (which took place on 16 Dec. 2010). You can take some help from it as sample template (i.e., how a talk could be organized)

I also wrote a post as a small talk on "writing" which may be useful for understanding the common problems while transferring ideas through writing.

Maintaining above practice for preparing slides would provide you inside worth of your own research work i.e., you can judge where you stand in terms of actual worth of your own work (approx.), therefore by preparing good slides one can always help himself or herself before anyone else. As a researcher, you are expected to be clear in transferring your ideas by speech. Making good slides is a science which must be mastered by a researcher.

If you find this post interesting please share it with your friends. By sharing it with people it will contribute either as feedbacks (correcting, adding, questioning etc.,) for me or some knowledge for other people. Always help the world, so that you could help most in return through the cycle.
Posted by Unknown at 3:33 AM 4 comments:

I finally defended my Master's thesis titled "Improving the Quality of Web Spam Filtering by Using Seed Refinement"on 16th December, 2010. The thesis deals with a significant problem from the viewpoint of today's World Wide Web namely Web spam which has become a nuisance for search engines today.

The thesis proposes seed refinement techniques for four well-known web spam filtering algorithms: TrustRank, Anti-TrustRank, Spam Mass, and Link Farm Spam. The input seed is refined by maintaining an exception list in the input seed set. This proves to be helpful in decreasing false positives while increasing true positives. Additionally, in this thesis, a strategy for the succession of the modified algorithms is also proposed. These are classified into two classes: a seed refiner followed by a spam detector. Modified TrustRank (MTR) and Modified Anti-TrustRank (MATR) which are seed refiners while Modified Spam Mass (MSM) and Modified Link Farm Spam (MLFS) which are spam detectors.

Following is my Master's thesis defense presentation which I am sharing for those interested:

Posted by Unknown at 9:57 AM No comments: